In this blog I would like to describe a simplified integrated pest management approach, for managing varroa mite, which can be used by the small-scale beekeeper throughout the year. 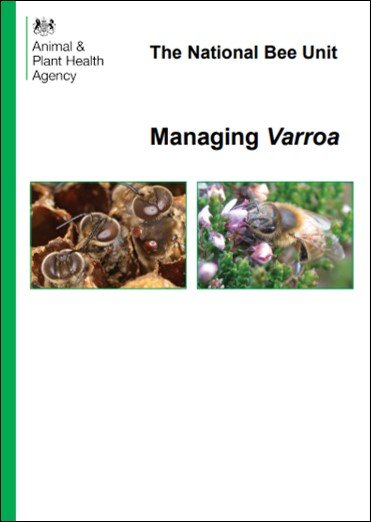 At this time of year, any honey supers will have been removed and bee numbers within hives will be falling.  I prefer to use a Thymol based treatment, like Apiguard, during the early Autumn.  It is manufactured by Vita Bee Health, who have some useful information and videos on their website.

It costs about £5 per colony and I bought mine from Bee Equipped Ltd, through Amazon. 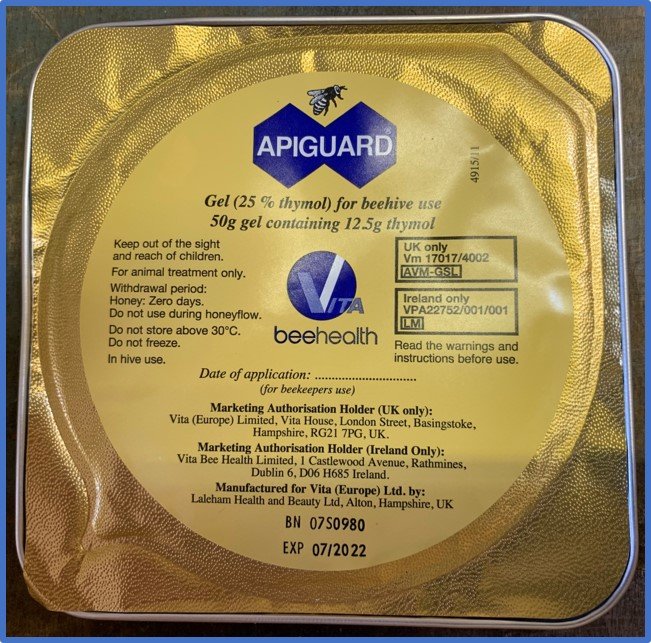 How do I apply Apiguard to the hive?

A shallow eke is very useful.  They are easy to make from a single 1.8m long piece of 32mm x 18mm planed stripwood, four 40mm screws and four dabs of PVC glue.  I have tried shallower ekes, which were only 18mm in height, rather than 32mm, but found that the workers started to build brace comb between the top of the frames and the crown board.  They don’t appear to do this with the 32mm ekes.

Apiguard comes in a small foil tray, with a foil lid.  Find the corner with the small pull tab and pull the tab until the lid is almost removed, but still attached at the opposite corner.  There is often almost as much gel on the lid as there is in the tray.  Keeping it together helps when clearing up, as well as keeping the batch code info with the tray. 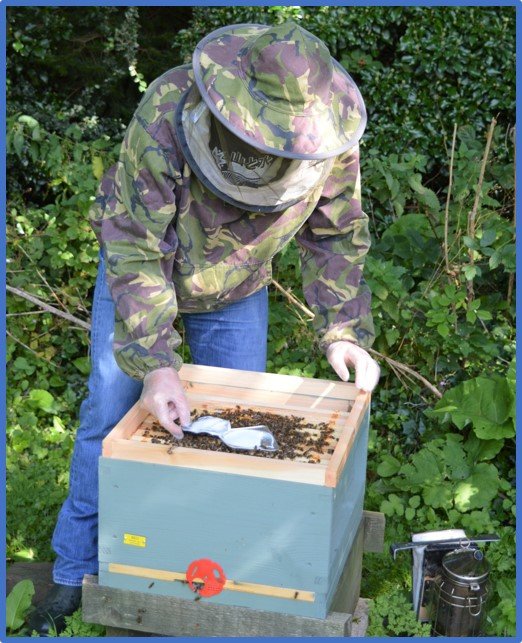 Any risk of tainting honey with Apiguard residue, or the wax that will be used to collect it, should be avoided.  The certain way to achieve this is by using Apiguard once supers have been removed.

The Veterinary Medicines Directorate state in their “Summary of Product Characteristics” sheet for Apiguard, that the following Special Precautions should be taken: –

The manufacturers state that it is preferable not use it with honey supers on the hive, any honey collected at this time can be fed back to the bees and any supers left on the hive should be above the treatment.

How does Apiguard work?

It’s not the vapour that does all the work dispersing the thymol throughout the hive, but the workers removing it.  The workers will use their mandibles to take bits of gel to remove it from the hive, will walk in it and get it on their bodies.  Within a few days it will be trailed throughout the hive and mixed with the food shared through trophallaxis.  The whole nest will have traces of thymol, which then comes into contact with the mites.

During the winter, normally between Christmas and New Year’s Day, I prefer to treat colonies with oxalic acid solution, using the trickling method.  Oxalic acid is particularly effective when there is no brood.  This is because any mites will be on the bees rather than in capped cells.  Click here or the image below to see my post “Simple Oxalic Acid trickling method for the management of Varroa“, which explains the process I use. 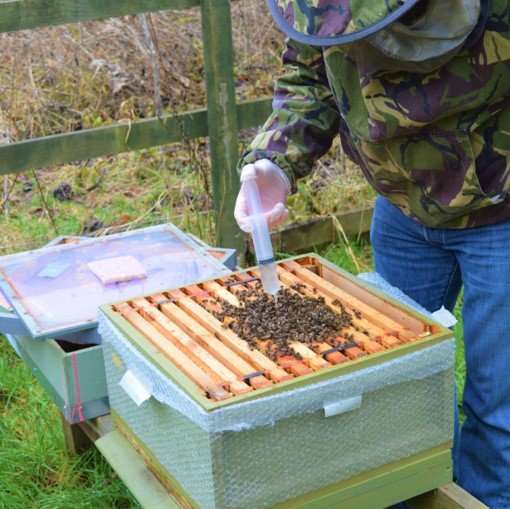 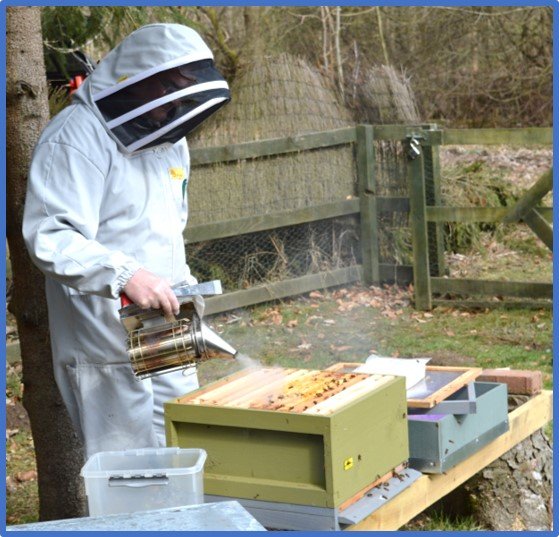 One of the key aims of this inspection is to classify each colony into one of the three categories: –

Click here to see my post “Bee Breeding – Why I put Characteristics before Ancestry“, which explains more about this classification of colonies.

Spring management for Varroa will differ depending on each category.

These colonies are not treated.  They managed to get through the same winter as the rest of the colonies and are thriving.  They may just be lucky or may have hygienic behaviours or developing resistance, either way they are “keepers”.  These colonies will be used to raise queens and drones.  They will not be merged with any other colonies to avoid any cross contamination.

These colonies are not treated either.  They are healthy though, did OK through the winter and are building up OK.  They may get merged to produce stronger colonies.

The healthy but defensive colonies are not treated either ! They will be merged, requeened and/or used to provide bees and stores for Apideas/nuc, with new queens.  They are not unhealthy, just a bit grumpy!

This leaves the “weak” colonies.

How do I manage Weak Colonies?

The first thing to do is to try to quarantine these colonies from the others and avoid transferring bees or frames, through manipulations, drifting or robbing.

I apply the following logic to managing these colonies: –

So, my approach for weak colonies is to give them a chance to build up on fresh comb, by doing either a bailey comb change or a shook swarm, depending on the severity of the problem.

Used for less severe cases of varroa, nosema or chalkbrood.  The colony could also be re-queened with better stock, if spare queens are available.  A thymol-based product could also be used, but you don’t want a colony that only survives because of constant treatment and attention.

This is a more drastic approach because the brood will be destroyed, along with the pathogen or pest.  Oxalic acid trickling would also be effective to deal with any mites which have escaped on the backs of bees, but you also need to decide if the colony is worth saving or if the apiary is better off without it. 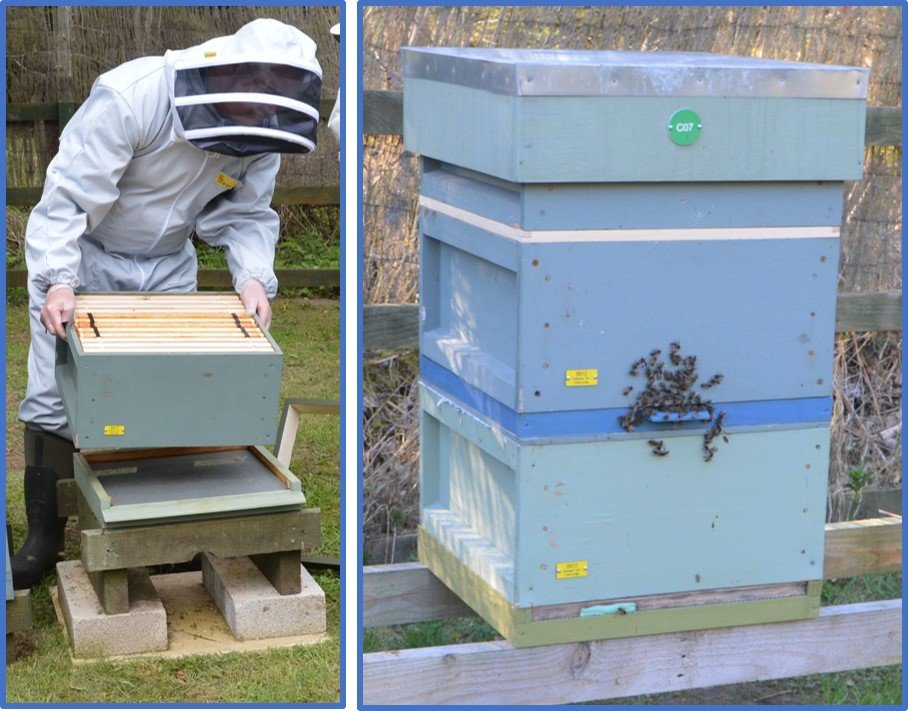 The picture above, on the left shows the start of a shook swarm.  (There should a queen excluder between that floor and brood body!)  The one on the right shows a hive going through a bailey comb change.

The summer months are about dealing with swarming, ensuring space for brood and stores and allowing the colonies to forage as much as the weather allows.  All colonies are checked for signs of varroa during routine weekly inspections. 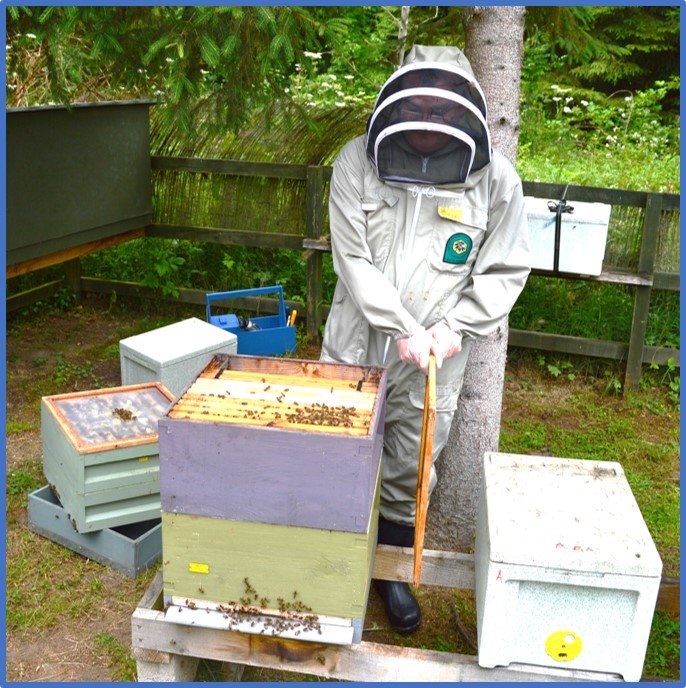 No apiary wide treatment is planned during the summer.  An underlying aim of the summer period is to add space to the brood nest with fresh comb.  This can be in the form of drawn sterilised comb or foundation, in additional brood bodies.  The plan is to be able to ensure that by the end of the season the brood nest is established on this new comb.  The old comb can be taken away when the colony shrinks in size in the autumn.

How do I use Drone Brood to manage Varroa in summer?

By placing a super frame on the outer edge of each brood body, colonies will tend to draw out the lower part of this frame with drone comb.  Because of the longer development time of the drones in their capped cells, the varroa mites prefer drone cells over worker cells.  This comb can be routinely removed from the “demote” category of colonies.  This prevents poorer quality drones emerging, as well as removing many of the varroa mites.  In the better colonies, this comb can be used for testing for the presence of mites.  Again, removing this comb, if required, will remove a significant proportion of mites. 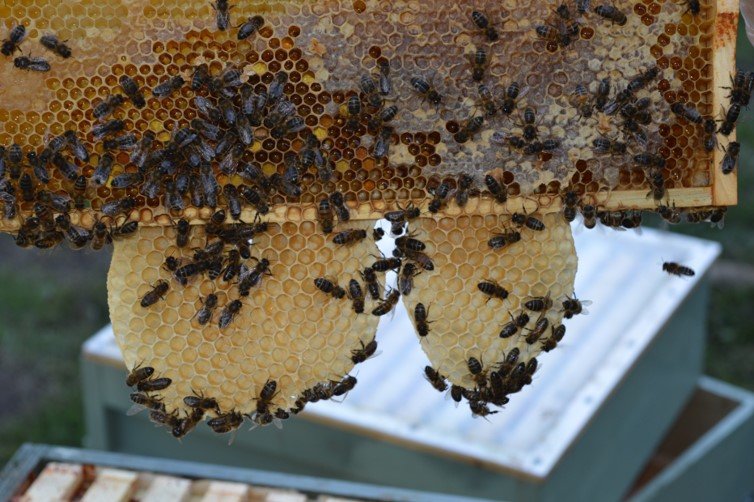 If a large colony is found to have a major varroa infestation during the summer, the same logic would apply on dealing with weak colonies in spring.  The colony would probably also have deformed wing virus or other problems too, which are also best fixed with a move to new comb.  This would give the colony a chance to re-establish on fresh comb before winter.

It is a legal requirement to keep records of any medications used on honey bees.  The national bee unit website outlines the information you are required to record.  They also provide a form which you can use to record hives, dates, batch codes and best before dates.  Click here to see the National Bee Unit “Veterinary Medicines for Bees” webpage“.

I record this information in my journal and take a photo with my camera of the lot code info on the pack.

In this blog I have tried to describe a simplified integrated pest management approach, for dealing with varroa mite, which can be used by the small-scale beekeeper, throughout the year.  It is based on the approach recommended by the National Bee Unit, in their leaflet, “Managing Varroa“.

This approach tries to encourage hygienic behaviour and resistance towards varroa mite, but also recognises that beekeepers have some husbandry responsibilities to help their bees cope, in the short term, with the onslaught of issues they face.