I recently performed wing morphology on my colonies to see if I could identify their ancestry.  The results suggest that my colonies are between 80% and 100% Apis mellifera mellifera.  Although my bees appear to be native or at least near-native, this is not the aim of my bee breeding programme.  It is just an outcome!

The main aim of my characteristics based, bee breeding programme is to have healthy, well-tempered bees, which adapt and thrive in the harsh conditions of rural Northumberland.

What characteristics do I look for when bee breeding?

Each year I rank my colonies and decide on my best colony.  The “Best” colony is based on the following characteristics: –

Health – Obviously it makes sense to pick a colony free of pest and disease, but colonies which appear to avoid the need for heavy treatments and invasive manipulations, as well as those which have a clean floor at spring clean time, are the ones I look out for.  I’m not looking for sterile colonies.  I’m looking for the colonies that appear to be overcoming issues better than the others.  Particularly any that display hygienic behaviours.

Temperament – This is based on how easy the colonies are to handle.  Even the best colonies will get a little agitated if they are short of space, queen-less, starving or being attacked!  I’m looking for the colonies where the bees just keep going about their business when they are being inspected.  The colonies which can be shaken off the combs into the brood body, during a disease inspection and stay calm, even in a large colony.

Productivity – This covers a range of characteristics.  The ability to get through the winter, be thrifty on stores and be strong at the end of it.  Capable of getting going early in the harsh conditions of rural Northumberland and building up quickly to be ready for the main flows of the local natural forage.  From the early snowdrops, gorse, onto clover, sycamore, willow herb, through to the heather and Ivy.

The focus of this selection is on the characteristics of the colony.  It is not on the strain of the queen, or the drones she mated with.  The aim is to breed from the colony which is most adapted and successful in the local conditions of rural Northumberland.

As for drones, the aim is to work with the natural mating behaviour of the honey bee, by allowing the queen to mate locally with a diverse range of local drones, which will themselves be from successful, locally adapted colonies, within mating range.

In their book on the mating biology of honey bees, Koeniger, Koeniger, Ellis and Conner describe their latest research which shows that queens tend to visit further away drone congregation areas than the drones, in an attempt to ensure multiple matings, with a diversity of unrelated drones.

The idea that some of these drones may be from other strains, feral colonies or the occasional introduction of outside stock by neighbouring beekeepers, only adds to the potential diversity of the colony, as well as providing the increased probability of development of new characteristics.

Studies show that colony strength and ability to withstand disease, improves as the number of drones the queen mates with increases.  Including the study by Tom Seeley and David Tarpy – “Queen promiscuity lowers disease within honeybee colonies”, published in 2007.

Meet Bethany – “B” to her friends! 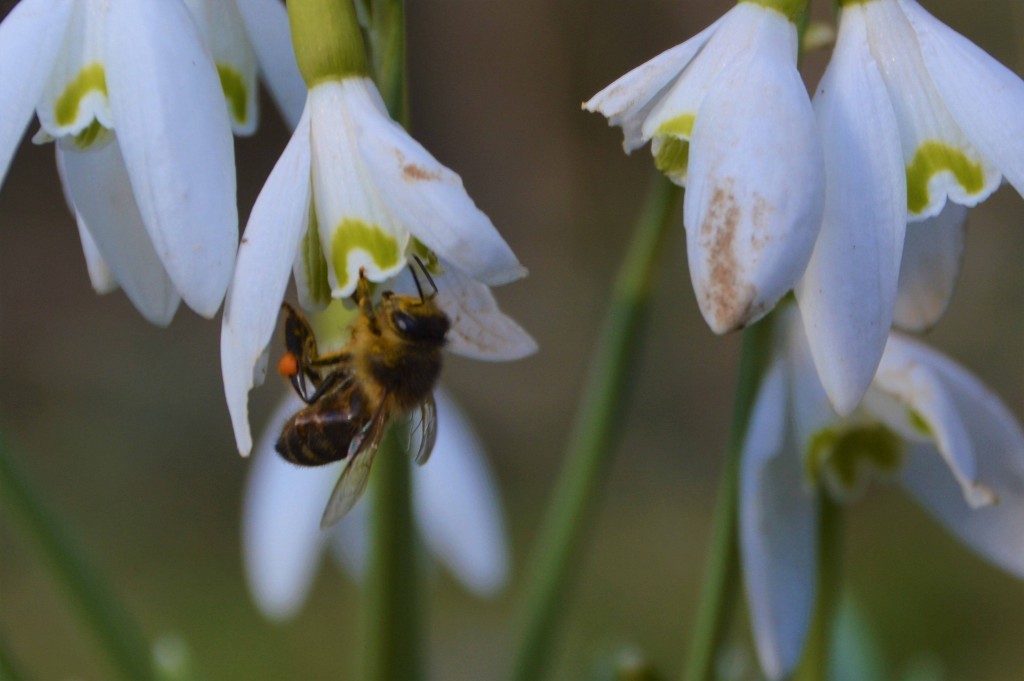 This photo is of a winter bee from one of my colonies.  Its barely 8 Degree C and she is out foraging on the snowdrops.  Her colony came through the winter healthy and strong, hardly touching the fondant that was put in the hive.  She pays almost no attention to me taking a photo from a few inches away.

These characteristics are more important to me than her ancestry.

How do I help the colonies with the best characteristics to be successful?

Promoting the best third of colonies – These colonies are used when it comes to queen rearing.  Drones from these colonies are promoted.  The aim is to provide good quality stock in the local area for mating with nearby apiaries and feral colonies.  These colonies are generally kept intact as much as possible.  If swarm preparations are made, the queen cells are taken into apideas or nucs.

Maintaining the middle third of colonies – These colonies are not used for queen rearing.  Drones can develop, although some drone removal may be done for varroa management.  The workers and brood frames may be used for making up apideas or nucs.  The colony may be used for honey production.

Demoting the worst third of colonies – These colonies are re-queened or merged with better colonies.  Drone comb is avoided or removed.  Workers, comb and stores are taken for use in apideas or nucs.

This approach had a dramatic effect on the improvement of my colonies when I started to follow it.  It can be easy to put up with a difficult colony and hard to bring yourself to kill the queen and reduce the number of colonies.  Its even harder when you worst third are actually not too bad!  Generally, the earlier issues are dealt with the faster the improvement is seen. 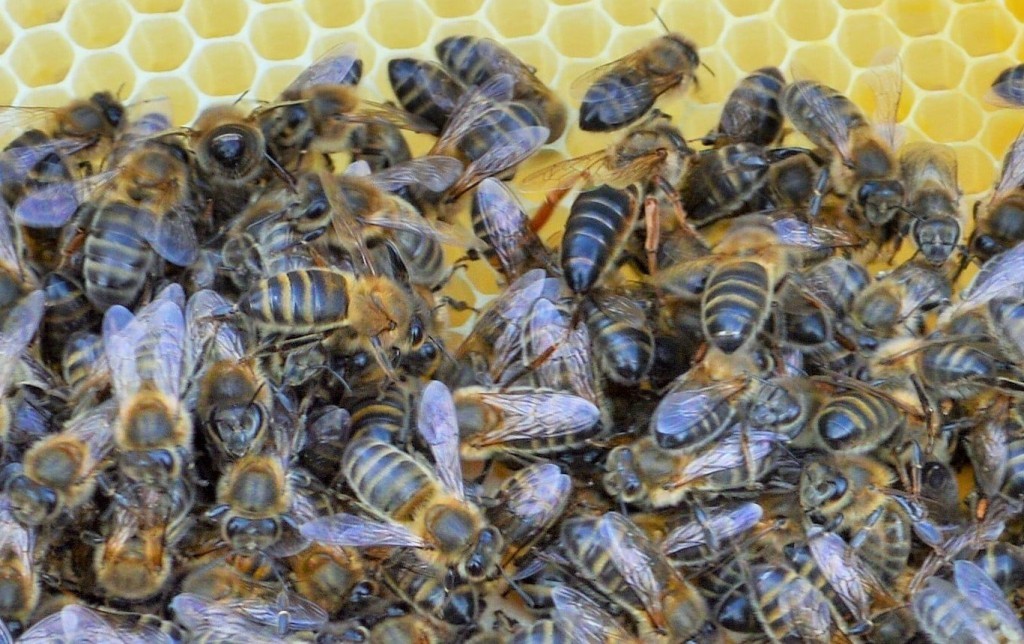 From their behaviour, appearance and wing morphology I consider my bees to be close relations to native or near-native bees.  This was not particularly a goal of my bee breeding programme but was the outcome of a strategy to raise queens from my best colonies, have them breed locally, with other successful colonies in the area (accepting that some of these may be from another strain, feral or introduced stock).  Then selectively promote or demote colonies based on health, temperament and productivity.

The result is that I have some nice colonies, which happen to be quite native.  This has been achieved using the simplest of queen rearing equipment and techniques, in a single open location in rural Northumberland, by working with the natural mating behaviours, the amazing evolutionary genetics of the honey bee and natural selection.

This approach could be used by any beekeeper.  It does not even require a queen rearing programme, just take queen cells at swarm time into apideas or nucs and keep the best ones!  We would be providing each other with even better drones and raising the standard of colonies in the area, if we all did it.