Went on a mission today to identify the mystery white pollen that my bees were foraging and bringing back to the hives yesterday.  I was on the look out for Hazel but could not find any.  There are a few large mature Yew trees near to the apiary, which are in full bloom and casting great clouds of white pollen in the light breeze. 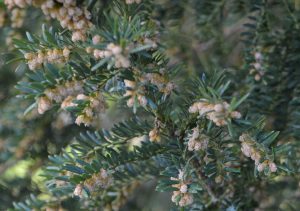 Shaking a branch of the tree released even thicker dusty white clouds.  I took a small sample of the strange little salt cellar like flowers, which I took home and made up a microscope slide, using the method I learned on the NDB Microscopy Short course. 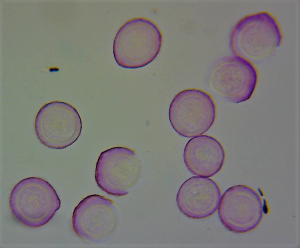 The Yew pollen varied in size between 25um and 30um.  It is round and has a granular surface.  On most of them apertures are not evident but on one or two there appears to be a small number of pore type apertures.  The intine looks quite thick.

Looking at Rex Sawyer’s Pollen Identification for Beekeepers, everything looks consistent, except he has Yew listed as 5=yellow, rather than 1=white.  If I accept that yellow ranges from a cream colour to almost orange then I’m going to work on the basis this is Yew pollen.

What else did I see the bees foraging on today ?

The snowdrops are still being worked but are coming to an end.  There were a few isolated Christmas Roses (Helleborus) being worked and some small pockets of Crocus.  The Crocus were receiving a lot of attention and would account for some of the orange pollen yesterday. 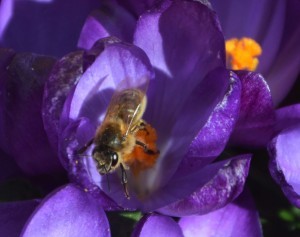 As I don’t have a Crocus slide in my set, I took a flower home and made up a slide for this too.  The Crocus pollen is large, 160um.  Its round and does not have any distinct apertures, although its surface is pitted. 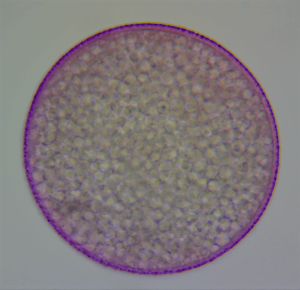 I think the mystery creamy white/grey/yellow pollen I saw going in yesterday is from nearby Yew trees.  I’ve been surprised at the range of forage the bees are bringing back to the hive this early in the season and look forward to seeing what they work on as the season progresses.